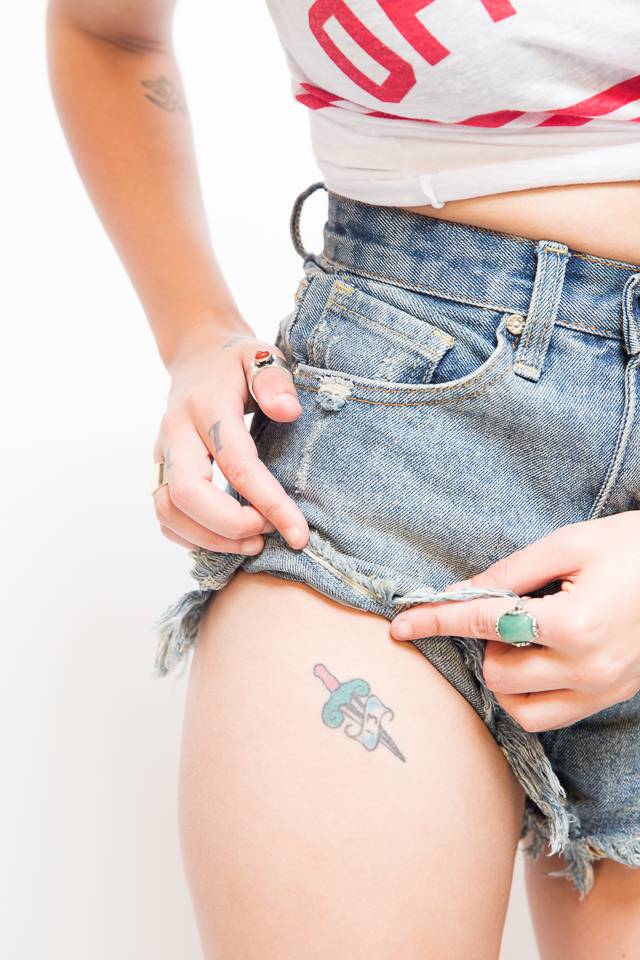 On the dagger tattoo with the number 13 on it located on her right thigh: "I got it in remembrance of a friend that passed away. This one was also when I was 16. I got it with a fake ID. It's awful. I got it in some back alley tattoo shop in Strasburg, Pennsylvania. No joke. It's all scarred and gross. I also went to a friend's senior prom afterwards. And when you're from Jersey, when you go to senior prom, you go down to the beach, you can go down the shore. The seaside. It's the thing, which is super embarrassing, and I could never say [it] in any interview but in this one, which is hilarious because a lot of people reading this are going to know exactly what I'm talking about. We were on the shore, and I had just gotten this tattoo, and I was running on the beach, and rolling around in the sand, and in the water, and came out, and realized the whole thing was just bleeding. I had sand stuck in it, and I was like 'this is why you're supposed to be a grownup when you get a tattoo.' It's a dagger. It's a traditional flash tattoo, and it's so gross now, but I kind of love that about it. It's pink and turquoise because the friend that passed away had pink and turquoise hair for years, and it was his identifier. I thought it was too cool. This tattoo is traditionally supposed to be done in yellow and red, but I picked these colors instead. The 13 is for January 3rd [1/3], and also an unlucky number. Also, I got it on Friday the 13th." Source

Uploaded by Celebritattoo 1 year ago, originally tattooed 9 years ago

© Photos and designs are copyrighted by their respective owners and are shared for inspirational purposes only, please don’t copy.